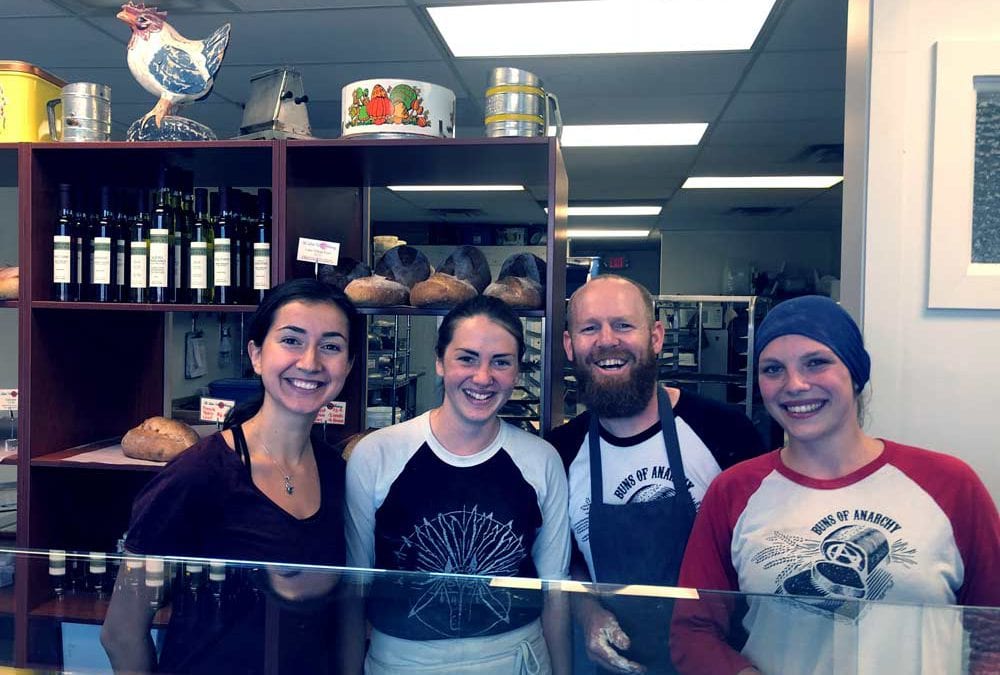 What would you do when faced with the difficult decision to sell the business you have been growing successfully for years?

You pass it on to good friends.

When Sean and Shannon Peltier opened The Lake Village Bakery (LVB) they never imagined that shortly after opening Sean would develop a severe allergy to one of the bakery’s key ingredients – flour.

Shannon carried the physical operations of the bakery while building a reputation in the small center as a must-see community gem. However, eventually the time came when Sean and Shannon decided to focus on family and pass the operation along to their trusted friends, and former coworkers, Meagan Bibby and Ian Young.

The difficult decision made perfect sense; Meagan and Ian were the perfect candidates.

Meagan had been working at the LVB for over a year when the offer to purchase the business was presented. The Level 2 Canadian Red Seal baker had learned the ins and outs of bread baking from Chantel, LVB’s Head Baker, and Shannon who still acts as her apprentice master.

Ian is a successful hospitality professional who was previously employed at Spirt Ridge Resort and several other well-known establishments from Kelowna to Osoyoos, but you may have also seen him at the bakery helping the team as-needed during its peak season. The Okanagan College graduate holds a Business Administration Diploma which allowed him to create a bakery business plan during his studies that he was able to adjust to reflect the sale of the LVB.

And this wasn’t the first time the two have had baking on the brain.

You may remember their smiling faces from the Kelowna and Osoyoos markets where the pair sold their plant-based baked goods as ‘The Ginger Baker’. The side project was successful, and they often sold out by days-end, but they never imagined being able to bake full-time.

Despite their credentials, the qualified couple were unable to secure funding through traditional financial institutions to finance the sale without collateral assets – a common roadblock for many young entrepreneurs.

“For us it was devastating, because we had a 42-page document of a business plan, we had done all the financials and we just didn’t have the assets…” Meagan said.

After a recommendation from a friend, they contacted Community Futures for help.  Community Futures was able to complete the business succession deal allowing Meagan and Ian the opportunity to add owner/operator to their resumes.

They launched the “new” LVB with some small site improvements, the same great products, and the same friendly faces tourist and locals alike will remember from previous visits.

It’s not uncommon to see a line-up an hour prior to opening and, after a recent positive review by The Food Network, the bakery’s popularity continues to grow.

A word of advice: be sure to arrive early to claim one of their exquisite daily creations featuring three-day sourdough ferments and locally sourced ingredients, including flour and seasonal fruit, which reflects their love for the region and the community they feel lucky to call home.