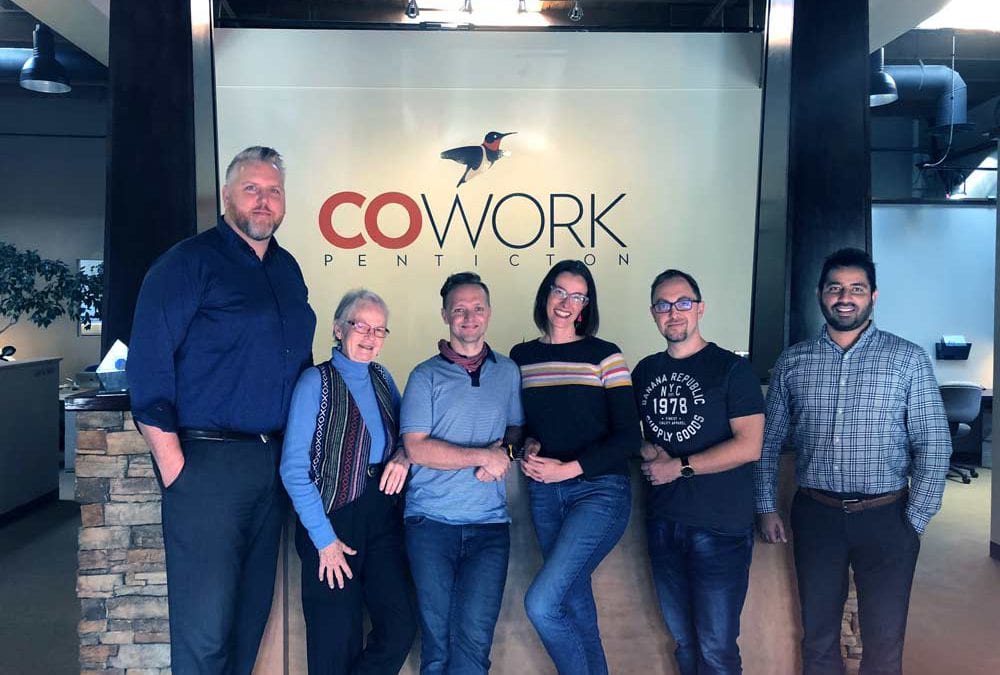 Have you ever tried to launch a business or idea in isolation? In the digital age, more positions are becoming work-from-home leading to a growing number of individuals facing the challenge of isolation. But what if there was another way?

After the first official “coworking space” opened in San Francisco in 2005, Penticton welcomed a coworking space of its own nearly six years later in 2011. The idea for Cowork Penticton was stumbled upon by Cowork Founders Jen and Nick Vincent.  After Jen travelled to Australia for a one-year Fine Arts University exchange, her trip grew to an eleven-year stay after finding like-minded people, a husband (Nick), and a community.

The Vincent’s were part of a vibrant community in Sydney, Australia. They participated in the up-and-coming warehouse culture by hosting themed parties. When they followed Jen’s parents to the South Okanagan, the couple decided to introduce themselves to the Penticton community by throwing similar themed parties. For Nick, it was a brand-new country, new town, and the parties were way to meet more locals.

During that time, Jen was working on a startup of her own in isolation. Although she participated in training with Accelerate Okanagan, Jen often found herself working on her ideas with no soundboard; no one to bounce ideas off.

When Jen was unable to launch her idea, she began to regroup. Acknowledging isolation as a factor contributing to her idea’s failure, she and Nick created a remedy to working in isolation inspired by hosting events. They set out to create Cowork Penticton: a space that would become a face-to-face hub and more to support the rural entrepreneur through facilitating partnership.

Things moved fast. In a month, the Vincent’s secured a space, a name, and funding through Community Futures, with mentorship through Futurpreneur Canada. Renovations and an unexpected zoning variation slowed the progress which gave the couple extra time to get a feel for their new space, tweak it, and find a community.

After facing their first major challenge of putting the Cowork Penticton community together, the Vincent’s faced another major challenge nearly six years later when they decided to relocate the business to a more central location.

So, the Vincents included the core group of people driving the community’s culture in the search for the new space who collectively chose their current location in 2018. “Coworking is a human management business, not a resource management business” says Nick. “The desk and internet connection are fundamental commodities that are part of the space but culture building and community management and managing the people; that’s what allows us to grow beyond desk rental” he continues.

By nurturing their community, Cowork Penticton has become a community gem and a cultural hub of activity with opportunities for participation. Interested individuals are encouraged to interact with the community by renting a meeting room or hot desk, attending the ever-popular Friday social, participating in the many events hosted by the community or by supporting the community by doing business with its members.

“We’ve realized what we’re best at is creating the culture for people to connect and allow our partners to do what they do best” Jen said.

So, next time you are looking for a realtor, lawyer, web developer or otherwise, connect with Cowork Penticton’s Community Manager, Christa, and support the Cowork community.